Menu
All information and updates regarding Coronavirus closure can be found on our ‘letters’ page. Home learning is on the class pages under the ‘children’ tab.
Care, Learn, Achieve

Time to celebrate your work at home....and what a fantastic job you're doing!

This week Louis has enjoyed the music topic - he knew some interesting facts about Manchester bands, made a fact file for drums and a poster for a concert. He has enjoyed the bite size lessons about frantic structure and long ladder letters.

He listened to the story of Rumpelstiltskin with classical music in the background, Louis said it made him feel relaxed. He has been on a few walks this week and finally managed to get to the barbers!

This week Louis has been enjoying the Bitesize lessons, particularly the Geography lesson about settlements and the Maths lessons about comparing length, height and shape patterns.

He produced some work about Christopher Columbus, a Mary Seacole timeline and he made an alternative ending for the Tiger who came to Tea. Louis liked the Royal tea activity and chose his sister Grace as his significant person to write about.

His theme night this week was Alice in Wonderland he made the props and chose to be a card guard.

He also had a trip out to Southport, had a paddle in the sea and was lucky enough to find a jellyfish! What a great week Louis!

A fantastic piece of descriptive writing about the rainforest, Eleanor!

Harry has been busy the last few weeks! He's been doing arts and crafts, making his own burger (called the Harry Burger), teaching Ben to swim, playing with lego and making dens in the garden.

Louis has enjoyed making the save the rainforest poster and the tree frog fact file and he drew a sketch of a snake. He used a map to show where the rainforests are in the world. He had fun playing the forest phonics game and has been keeping up with spelling shed.This week he had a try at Hamilton maths which he worked really hard with. He has also watched the bite size videos on fractions. Louis chose 'The Tiger Who Came to Tea' for his sock puppet he also drew a table and he chose to use food items from his M&S shop and set them out to show what the tiger had eaten.

Louis has made a scarecrow this week for his rugby team as they have had the pitch fertilised and wanted some protection for the seeds. Well done Louis!

Louis has enjoyed the sports activities this week: he has made an obstacle course, a medal and a team work poster.

He liked the story of Martin the Mouse and the shoot to score game as he played as Manchester United.

He has also tried the Enrich activities and has been keeping up with spelling shed.

The weekly theme night this week was a Luau party!

This week Louis has really enjoyed the topic of ‘Under the Sea’ and has enjoyed all the activities:

He has made a junk model of a turtle egg, a baby and a mum, all from recyclables and paper mache.

He made a fact sheet for the turtles.

He made the message in a bottle and the den and enjoyed the reading writing activities which were set.

He held his weekly theme night - this week was Harry Potter and he made all the props with his family from recycled materials and paper mache.

He has also been making the most of the outdoors again.

This week Louis has submitted his entry for the art competition and has been enjoying lots of outside spaces.

He had a weekly theme night and has visited the beach at St Anne’s and enjoyed some fish and chips and ice cream. Sounds great!

Louis has been to the Wizard Walk at Alderley Edge, taking his binoculars and enjoying looking for wildlife to spot. He collected some pine cones and sticks and he made a collage with them.

He has been working hard on some spellings and maths and again has enjoyed the Bitesize lessons.

Louis took part in World IBD day and held his weekly theme night - this week was back to the 80s. He also visited the beach at Formby. Sounds like a lovely week Louis! 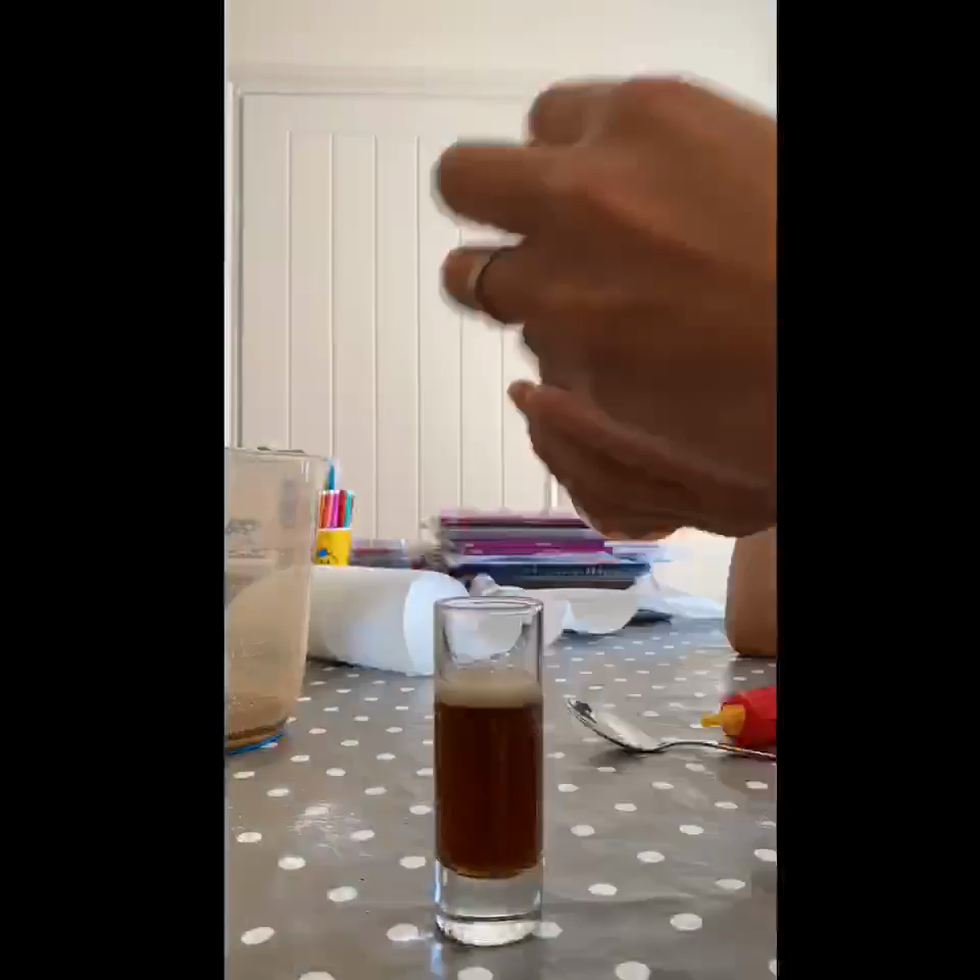 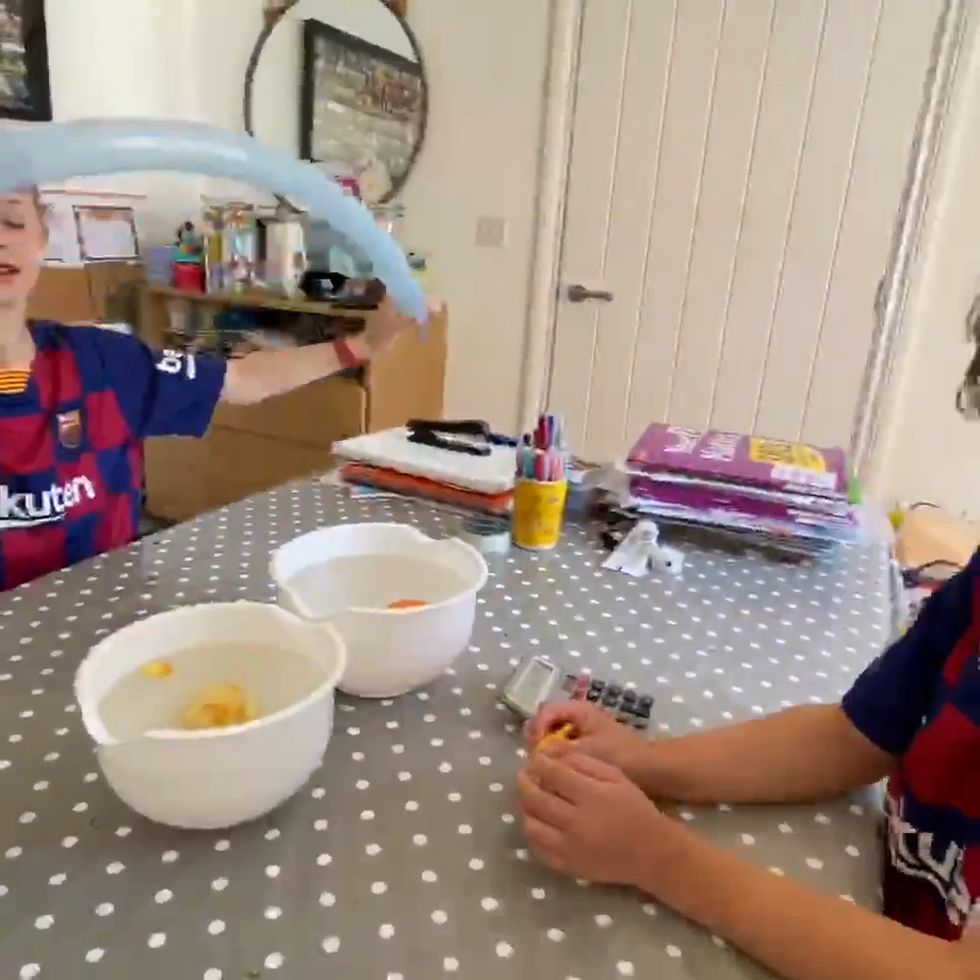 Dylan and his brother Evan have been doing some science experiments and having lots of fun! These videos have put a smile on our faces Dylan, thank you!

This week Louis has been working hard on spelling and maths shed. For this weeks topic he has made a party invitation and written lists of what he will need for the party. He had an indoor beach day at home, another theme night and he has enjoyed perfecting his skills on the rope swings in Worsley Woods. Sounds great Louis!

George has been enjoying his time off with Emily - baking bread and designing tie dye t-shirts! They look fantastic, well done!

Eleanor has been having lots of fun with Ollie. She has played lots with her dolls and lego. She has gone on a camping trip in the garden! Ellie has also done lots of fun activities, including sewing, baking lots of cakes, making bug hotels and growing crystals. When going outside, Ellie has been learning to ride her new big bike and going on river walks. Finally Ellie has been supporting the local people of Mosley Common by opening a Lockdown Library. Every day that the weather is good, Ollie and Ellie put out a selection of books for both children and adults to take. People have been using the library and have taken lots of books and brought books back. Ellie says hi to all her friends at Boothstown!

Looks like you've been having a great time Eleanor!

Finley has been enjoying this week's food topic. He has been working hard with Jacob to sort food into different groups, he watched a programme about how cereal is produced and potatoes are harvested and had a go at making his own pizzas and gingerbread! Wow Finley, sounds great!
Olivia has really enjoyed marking the 75th anniversary of VE day with some artwork and a story. Well done!

Louis celebrated VE day with his family by having afternoon tea and decorating the house. He has also been flying his kite and making a jar of activities for after lockdown. Another great week Louis!
More fantastic work from Dylan...he has been playing Times Table Rockstars improving his speed per question from 14 seconds to 2.4 seconds wow! He has also written a short story about the Pobble 365 image from our animals topic and had time to complete some construction work. Great photos

Holly has been using her time in lockdown to the full! She has been exercising with Joe Wicks, making music with Myleene Klass, crafting, baking, doing science experiments, dressing up and enjoying the sunshine! Lovely photos

Louis has had a busy week! He took Part in Glastayinbury for the NHS turning his living room into a festival setting, making  tents, lanyards, and dressing in festival gear. He has also made a quarantine time capsule, a weather wreath, had a fancy dress 'rock star' night, been on lots of walks in Worsley woods and taken part in a nature trail set by the woodland trust. Wow Louis, what an exciting week - quarantine in style

I'm glad to hear you are enjoying the BBC lessons too!

Great artwork Olivia - a drawing of Jacques Cousteau, a French undersea explorer. I love how you have linked the 'Animals' theme this week to your own learning

Finley has been researching and categorising animals this week with his brother, Jacob. Great work boys!
Dylan's learning journal is filling up fast.....Well done :)
Louis drew a rainbow for Reverend Garfield...how thoughtful. He's also been working hard on his times tables and created a new school logo from this week's home learning. Brilliant!
George has been practising his new skill on the Marriot golf course .....skateboarding! Great work George, you look like a pro :)
Finley has been learning about St George and the dragon and even made a 3D one. Very impressive Finley!
Louis has been getting creative....making a robot from cardboard and tinfoil. Looks great!
CEOP
Top
Cookie information
Cookie Notice